The aspect of cell line development that arguably adds the greatest challenge to the workflow is the need to derive cell lines from a single cell. This requirement drives the well throughput into the thousands when searching for the optimal expression clone. It also adds significant time to the process as cells require weeks to grow up to usable levels and cell viability is often reduced when plating at the single-cell level. There is also the challenge of isolating a single cell per well and there are a number of different routes to achieve this.

Limiting dilution is a traditional approach to achieve monoclonality. It entails diluting cells to the level that there is one cell on average per unit of volume plated in the wells. However, as predicted by the Poisson distribution, roughly one third of the plated wells will have zero cells, one third of wells will have a single cell, and one third will have multiple cells per well (Coller and Coller 1986). This inefficiency has driven the use of alternative technologies such as single cell printers or cell sorters which can deliver single cells in nearly all wells. However, the high cost of these cell sorting devices continues to drive the use of limiting dilution In addition, cells are often exposed to the non-sterile environments prior to introduction to the cell sorter, potentially leading to contamination, while the sorting process itself (pressure, time outside incubator, etc.) can impact cell viability.

Here we describe the automation of limiting dilution on a Biomek i7 Workstation (Figure 1) that overcomes a number of challenges associated with this workflow. Plate throughput was enabled through the use of storage devices such as labware feeders and the ability to integrate numerous devices can support automated analyses. The system used a HEPA-filtered enclosure to maintain a clean environment for cell manipulations and sterile pipette tips to further ensure sample sterility. This is of the utmost importance for this workflow as the cultures will be maintained for weeks, allowing sufficient time for any contamination to spread. 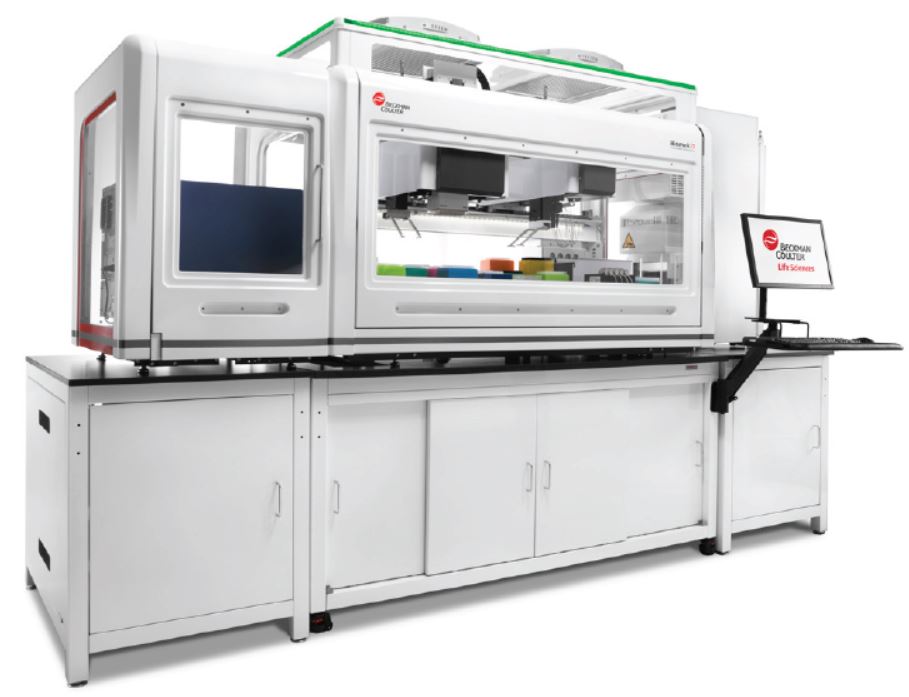 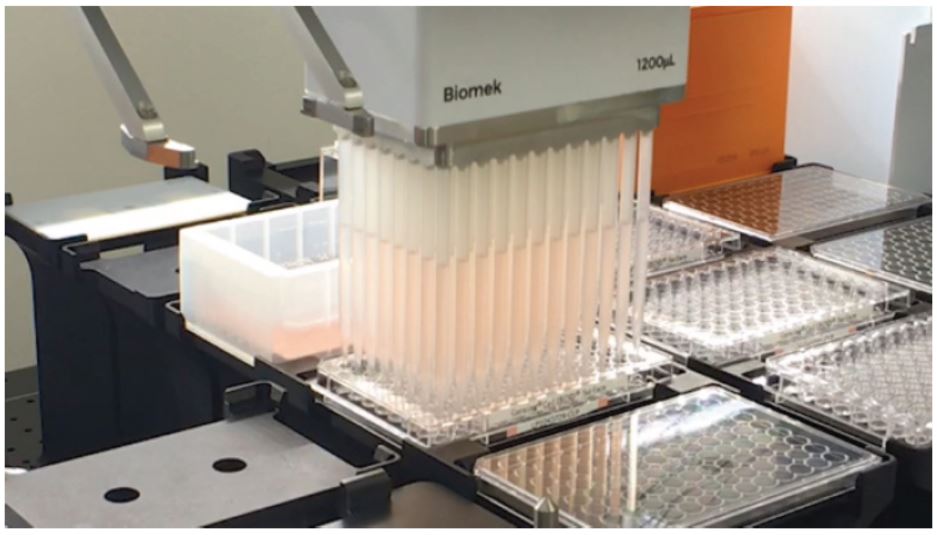 To create single cells colonies, the Biomek Workstation mixed and dispensed CHO cell suspensions to an integrated Vi-CELL XR Cell Viability Analyzer for counting. Based on the resulting cell count, ~83,300 cells were then transferred into 1mL 0.25 μM calcein AM and incubated at 37°C for 30 min. Following an initial 25-fold dilution, ~467 cells were added to a 140mL XP CHO Growth A media (Molecular Devices) such that there was one cell per 300 μL on average. Robust mixing and rapid filling of four 96-well plates was achieved through the ability to aspirate and dispense 96mL at one time with the 1200 μL-capacity multichannel head (Figure 2). Well A1 was then removed from the first plate and replaced with 300 μL of the intermediary dilution with 100X more cells to act as a control to optimize imaging focus and exposure time. Plates were spun in an integrated microplate centrifuge (Agilent) at 300 X g for 3 min to ensure any cells were at the plate bottom for immediate imaging on the CloneSelect Imager (Figure 3A, Molecular Devices). By eliminating the time for all cells to settle, we minimized the likelihood of early cell division and/or calcein stain efflux leading to false negatives.

Figure 3B shows the imaging results of a typical plate following automated limiting dilution plating. Monoclonal wells (green/yellow) are distinguished from those wells with zero (white) or multiple cells (red). To determine the sufficiency of mixing in the large-volume reservoir, we analyzed the frequency of monoclonality in each plate location across five experiments (20 wells).

Figure 4A shows the resulting distribution and no discernable location bias is detected. Inter-experiment consistency is demonstrated in Figure 4B, where the average frequency of monoclonal wells across the five experiments shows a narrow distribution (CV = 8.6%), at or near the expected frequency for a limiting dilution approach.

While limiting dilution cannot achieve the efficiency of a cell sorting approach to monclonality, automating this plating and analysis as part of a larger automated cell line development system can reduce the effort needed to achieve the throughput required to identify optimal clones while also removing the need for additional costly tools.

Biomek Automated Workstations are not intended or validated for use in the diagnosis of disease or other conditions. Beckman Coulter Life Sciences genomic reagent kits are for research use only.